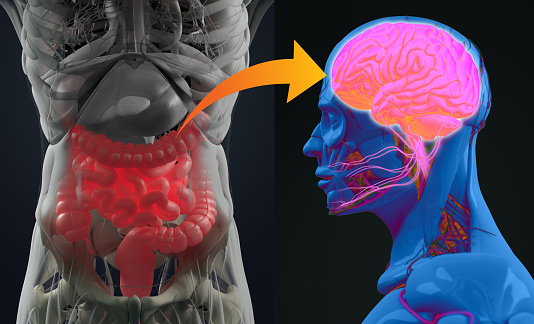 The gut-brain axis (GBA) is a bidirectional link between the central nervous system (CNS) and the enteric nervous system (ENS) of the body. It involves direct and indirect pathways between cognitive and emotional centres in the brain with peripheral intestinal functions. The GBA involves complex crosstalk between the endocrine (hypothalamic-pituitary-adrenal axis), immune (cytokine and chemokines) and the autonomic nervous system (ANS).

The GBA primarily combines the sympathetic and parasympathetic arms of the autonomic nervous system (ANS), which drives both afferent and efferent neural signals between the gut and the brain, respectively. The HPA axis meanwhile coordinates adaptive responses against stress including activation of memory and emotional centres in the limbic system of the brain.

The neuro-immuno-endocrine mediators of the GBA allow the brain to influence intestinal function (immune cells, epithelial cells, enteric neurons, and smooth muscle cells). Moreover, the cells of the gastrointestinal (GI) tract are also under the influence of the gut microbiota and recent evidence suggests that there is an emerging concept whereby the microbiome plays an important role in the GBA structure.

The microbiome refers to all microorganisms in or on their host as well as their genetic material. The microbiota, on the other hand, defines the microbe population in a specific ecosystem, such as those populations found in the gut microbiota or skin microbiota.

Within the gut, there are approximately 1014 microorganisms, which is around 10 fold more cells than there are cells in the human body.

Collectively, the genetic material of the microbiome is approximately 150 times greater than the human genome, which has led some scientists to label the microbiome as a ‘superorganism’.

In recognition of this superorganism and the mutualistic co-evolution of humans and microbes, the Human Microbiome Project was set up to analyse this unique relationship to determine its role in health and disease. This is particularly important given the rise in modern antimicrobial treatments, disinfectant use and harsh cleaning products that are frequently marketed and sold as necessary for good human health.

Within the gut, the bacterial phyla Firmicutes and Bacteroidetes are approximately 75% of the gut microbiota and both of these phyla are very sensitive to change. Disruptions to the microbiome are increasingly becoming associated with the prevalence of allergies, autoimmune diseases, metabolic disorders and neuropsychiatric disorders that affect today’s society.

A newborn is first exposed to the mother’s vaginal microbiota which influences the offsprings microbial signature. Studies show that the gut microbiota is central to the development and maturation of the human CNS and ENS in these early postnatal weeks. The interaction between the GI mucosal lining and the gut microbiome also helps to fine tune the developing immune system.

Much of the research into the brain-gut-microbiota axis has involved germ-free animals and studying the effect of antibiotics, probiotics and faecal transplants to determine their effects of the gut microbiota on brain activity. Many of these studies suggest that the gut microbiota produces relevant levels of neurotransmitters and are, in part, responsible for many facets of health and disease.

The microbes of the gut microbiota interact with the GBA through the following pathways:

Afferent Spinal and vagal sensory neurons carry feedback from the intestinal end to the brain stem which in turn engages the hypothalamus and limbic system (responsible for regulation of emotions). Similarly, descending projections from the limbic system (activated via stress) influence autonomic activity of the gut.

Bacterial products are known to stimulate enteroendocrine cells (EECs) to produce several neuropeptides such as peptide YY, neuropeptide Y (NPY), cholecystokinin, glucagon-like peptide-1 and -2, and substance P. These neuropeptides then enter the bloodstream and/or directly influence the enteric nervous system.

Approximately 95% of Serotonin (5-HT) is produced by gut mucosal enterochromaffin cells. Peripherally, 5-HT is involved in the regulation of GI secretion, motility (smooth muscle contraction and relaxation), and pain perception, whereas in the brain 5-HT is implicated in regulating mood and cognition. Gut microbiota also play an important role in tryptophan metabolism which is the precursor to the production of Serotonin.

The gut associated lymphoid tissue comprises 70% of the body’s immune system and can be conceptualised as the largest immune organ in the body.

Chronic stress has been shown to alter intestinal permeability (leaky gut syndrome), which is associated with a low-grade inflammation that can be functionally linked to psychiatric disorders such as depression. In many of these cases, it is the increased presence of circulating bacterial endotoxins, known as lipopolysaccharides (LPS), which are fundamental risk factors for disease. Alternatively, other studies have suggested that the gut microbiota can produce neuroactive substances that may influence the core symptoms of neuropsychiatric disorders. This alternative hypothesis could signify a critical and relevant role of gut microbiota in the pathophysiology of many disorders, including schizophrenia, autism, anxiety and depression.

Many species of Lactobacillus and Bifidobacterium produce gamma-aminobutyric acid (GABA), which is the main inhibitory neurotransmitter in the brain. In addition, Candida, Escherichia, and Enterococcus produce the neurotransmitter serotonin, while some Bacillus species have been shown to produce dopamine. Bacteria also produce short-chain fatty acid (SCFAs), such as butyric acid, propionic acid and acetic acid, that are able to stimulate sympathetic nervous system, mucosal serotonin release and thus influence the memory and learning process in the brain.

Irritable bowel syndrome (IBS) is a gastrointestinal disorder characterised by altered bowel habits in association with abdominal discomfort or pain in the absence of detectable structural and biochemical abnormalities. Psychiatric co-morbidity e.g depression and anxiety are overrepresented in individuals with IBS.

Besides altered gastrointestinal motility, visceral hypersensitivity, post-infectious reactivity, alteration in faecal microflora, bacterial overgrowth, food sensitivity, carbohydrate malabsorption, and intestinal inflammation, the gut brain alteration is known to be a major factor in the pathogenesis of IBS. Modulation of the gut-brain axis in IBS offers a promising therapeutic target for the future.

The gut microbiota can be intentionally manipulated to help maintain health and prevent or treat disease.

Recent experimental evidence would appear to suggest that alterations to the gut microbiota composition through probiotic treatment could attenuate neuropsychiatric symptoms or even reduce the risk of developing future psychiatric symptoms.

As an example, treatment with Lactobacillus rhamnosus induced region-dependent changes in GABA expression in the cortical cingulate, hippocampus, amygdala and prelimbic regions. This treatment thereby reduced the stress-induced release of cortisol, which in turn reduced anxiety and depression-related behaviour.

Antibiotics reduce the numbers and diversity of commensal bacteria, which can allow pathogenic or parasitic microbes an opportunity to thrive in. Wholesale microbiota changes caused by antibiotics have been shown to influence adult behaviour through modulation of hormone expression levels and tryptophan metabolic pathways, which are associated with serotonin secretion.

A study we covered showed that mice that were treated with antibiotics performed worse on memory tests due to impairments in hippocampal neurogenesis. However, if mice were given probiotics or an exercise wheel, they showed profound improvements. The researchers showed that a specific subset of monocytes act as a communicating cell between the brain, the immune system, and the gut.

Diet is known to be one of the most important factors that influence gut microbiota. Prof Jacka has a series of talks on the role of diet in mental health which you can view here.

Diet manipulation can influence gut microbiota by affecting the composition and function of the microbial community. These alterations, in turn, can modulate the innate and adaptive immune systems as well as influence behaviour and mood.

A recent study showed that a gluten-free diet improved schizophrenia symptoms in a single case where the individual also had a complex autoimmune disorder. Although remission from psychotic symptoms was attributed to the maintenance of a gluten-free diet, further studies are needed to determine the impact of dietary gluten in patients with schizophrenia and who are also gluten-sensitive.

The mutualistic synergy between microbes and humans is a relationship that is essential for growth, development, health and the prevention of disease.

“The past 5 years have seen an amazing increase in our knowledge of how bacteria signal to the brain and the implications this has for psychiatry. There are still many open questions, however.

Firstly, the mechanisms of how the microbiota signals to the brain are only slowly being unraveled. We are at the very early stages of research, which will need to employ experimental rigor that must be employed to unequivocally demonstrate that it is the actual production of a neurochemical in vivo by a specific microorganism, and not a non-neurochemical aspect of the microorganism, such as a cell wall component interacting with immune cells in the gut, that is responsible for a specific change in behavior.

Secondly, the individual components of bacteria that are mediating their effects need to be disentangled. The evolving field of metabolomics is advancing and assisting in our ability to better understand the signaling cascades and roles of bacterial products.

Thirdly, as most of the studies to date have been in rodents, further human studies are needed to determine if bacteria-based interventions can indeed have a positive effect on mental health, a so-called psychobiotic effect.

Although some preliminary studies have focused on the altered composition of the microbiota in depression and autism, the time is now ripe for a comprehensive analysis of the microbiota in other disorders, including schizophrenia, anxiety, drug addiction, and eating disorders followed by mechanistic studies that will determine if such changes have any causal relationship to psychiatric symptomatology”.