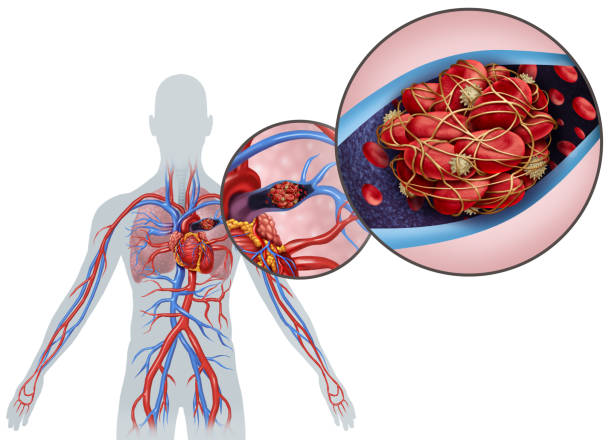 How & Why Blood Clots

Continuing with our blood theme for the month of June we explain how and why blood clotting is necessary. Haemostasis is the body’s way of stopping injured blood vessels from bleeding. Haemostasis includes clotting of the blood.

Consequently, the body has control mechanisms to limit clotting and dissolve clots that are no longer needed. An abnormality in any part of the system that controls bleeding can lead to excessive bleeding or excessive clotting, both of which can be dangerous. When clotting is poor, even a slight injury to a blood vessel may lead to severe blood loss. When clotting is excessive, small blood vessels in critical places can become clogged with clots. Clogged vessels in the brain can cause strokes, and clogged vessels leading to the heart can cause heart attacks. Pieces of clots from veins in the legs, pelvis, or abdomen can travel through the bloodstream to the lungs and block major arteries there (pulmonary embolism).

We discuss these processes in more detail here.

An injured blood vessel constricts so that blood flows out more slowly and clotting can start. At the same time, the accumulating pool of blood outside the blood vessel (a haematoma) presses against the vessel, helping prevent further bleeding.

As soon as a blood vessel wall is damaged, a series of reactions activates platelets so that they stick to the injured area. The “glue” that holds platelets to the blood vessel wall is von Willebrand factor, a large protein produced by the cells of the vessel wall. The proteins collagen and thrombin act at the site of the injury to induce platelets to stick together. As platelets accumulate at the site, they form a mesh that plugs the injury. The platelets change shape from round to spiny, and they release proteins and other substances that entrap more platelets and clotting proteins in the enlarging plug that becomes a blood clot.

Formation of a clot also involves activation of a sequence of blood clotting factors, which are proteins produced mainly by the liver. There are over a dozen blood clotting factors. They interact in a complicated series of chemical reactions that ultimately generate thrombin. Thrombin converts fibrinogen, a blood clotting factor that is normally dissolved in blood, into long strands of fibrin that radiate from the clumped platelets and form a net that entraps more platelets and blood cells. The fibrin strands add bulk to the developing clot and help hold it in place to keep the vessel wall plugged.

The reactions that result in the formation of a blood clot are balanced by other reactions that stop the clotting process and dissolve clots after the blood vessel has healed. Without this control system, minor blood vessel injuries could trigger widespread clotting throughout the body—which actually happens in some diseases.

Some people are at high risk of forming blood clots and are intentionally given drugs to decrease the risk. Drugs may be given that reduce the stickiness of platelets, so that they will not clump together to block a blood vessel.  These drugs listed below, interfere with the activity of platelets.

Other people at risk of forming blood clots may be given an anticoagulant, a drug that inhibits the action of blood proteins called clotting factors. Although often called “blood thinners,” anticoagulants do not really thin the blood. Commonly used anticoagulants are warfarin, given by mouth, and heparin, given by injection. Direct oral anticoagulants (DOACs) directly inhibit thrombin or activated factor X, potent proteins that are needed for clotting to occur. Examples of DOACs can be seen above.

People who take warfarin or heparin must be under close medical supervision. Doctors monitor the effects of these drugs with blood tests that measure the time it takes for a clot to form, and they adjust the dose on the basis of test results. Doses that are too low may not prevent clots, while doses that are too high may cause severe bleeding. Other types of anticoagulant drugs, such as low-molecular-weight heparin, do not require as much supervision. People taking DOACs do not require frequent laboratory testing of coagulation.

If a person already has a blood clot, a thrombolytic (fibrinolytic) drug can be given to help dissolve the clot. Thrombolytic drugs, which include streptokinase and tissue plasminogen activators, are sometimes used to treat heart attacks and strokes caused by blood clots. These drugs may save lives, but they can also put the person at risk of severe bleeding. Heparin, a drug given to reduce the risk of clot formation, sometimes has an unintended, paradoxical activating effect on platelets that increases the risk of clotting (heparin-induced thrombocytopenia-thrombosis).

Estrogen, alone or in oral contraceptives, can have the unintended effect of causing excessive clot formation. Certain drugs used to treat cancer (chemotherapy drugs), such as asparaginase, can also increase the risk of clotting.

Bruising or bleeding after an injury is normal (see also How Blood Clots). However, some people have disorders that cause them to bruise or bleed too easily. Sometimes people bleed without any obvious triggering event or injury. Spontaneous bleeding may occur in almost any part of the body, but it is most common in the nose and mouth and the digestive tract.

People with haemophilia often bleed into their joints or muscles. Most often, bleeding is minor, but it can be severe enough to be life-threatening. However, even minor bleeding is dangerous if it occurs in the brain.

Several symptoms may suggest that a person has a bleeding disorder:

When to see a doctor or Healthcare practitioner

People with warning signs should see a doctor right away, as should those who are still bleeding and those who have lost more than a small amount of blood. People without warning signs who notice that they bleed or bruise easily should call their doctor. The doctor determines how quickly to evaluate people based on their symptoms and other factors. Typically, people who do not feel well or have risk factors for bleeding, such as liver disease or use of certain drugs, or who have a family history of a bleeding disorder should be seen within a day or two. People who feel well but had a few nosebleeds that stopped on their own or who have bruises or spots on their skin can be seen when practical. A delay of a week or so is unlikely to be harmful.