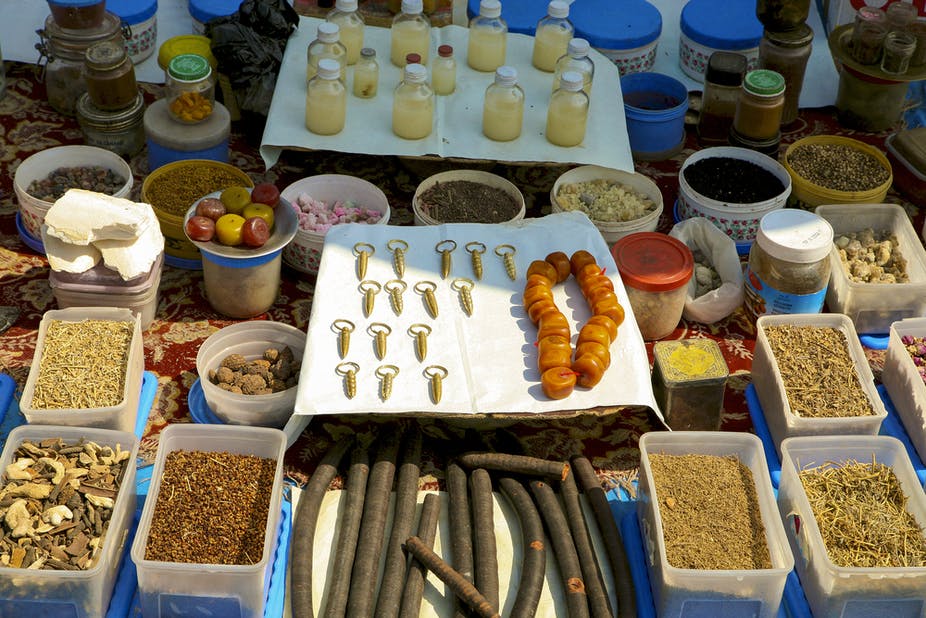 Africa is home to an extensive and diverse medicinal plant life. This includes commonly used herbs like:

Numerous traditional African medicines are undeniably beneficial in treating disease or maintaining good health. Some have even been the source of many prescription medicines. But there are challenges. These include the fact that many consumers automatically assume “natural equals safe”. Another problem arises when people use traditional or herbal remedies together with prescribed medicines.

Research conducted at North-West University in South Africa is focused on understanding these combinations. Which are harmful? Which could be beneficial? We’re looking at what’s known as “interactions” – the effect herbal medicines may have on the normal uptake, breakdown or activity of prescribed medicines. Knowledge is key. Scientists need to conduct proper research to understand such interactions. Consumers need to be taught about these interactions, whether good or bad, and to tell their healthcare providers about everything they’re taking.

Prescriptions of traditional African medicines tend to be secretive. They’re based on knowledge passed from generation to generation of traditional healers. This can result in vague doses. Patients have been known to overuse some remedies while self-medicating. This can have severe health consequences. These include stomach upsets, liver damage and even kidney failure. Some widely used natural health plant products which have been associated with adverse health effects because of misuse include Aloe vera, Echinacea (Echinacea purpurea) and Green tea (Camellia sinensis).All of these natural remedies are generally considered “safe”, or even healthy by consumers since their use is not regulated or restricted. Nothing indicates to the user that “too much of a good thing” could be dangerous.

Thanks partly to efforts by the World Health Organisation, access to Western medicine – especially for diseases like HIV/AIDS – is increasing across Africa. More and more people tend to be using traditional medicine in combination with prescription medicines. Often none of their healthcare providers know about this and so cannot warn about possible interactions. Some traditional African medicines may interfere with the normal metabolism of drugs. For example, St. John’s Wort is a natural remedy frequently used for depression. But it’s been shown to increase the removal of medicines, such as some oral contraceptives, from the body. This can lead to ineffective levels of the prescribed medicine, putting women at risk of pregnancy when they think they are protected.

On the other hand, the interaction could also result in reduced clearance of a drug. This may lead to higher levels of the prescribed medicine in the body, which produces negative side effects and could even lead to toxicity. These interactions happen at a metabolic level. So even herbal products that are safe when used on their own may pose a risk when taken in combination with Western medicine – that is, synthetic pharmaceutical agents. Some of the best known examples of drug interactions are the effects of citrus, particularly grapefruit juice, and alcohol of many prescribed medicines. These combinations should be avoided.

Another example of particular importance in Africa is Cancer bush (Sutherlandia frutescens). It is widely used in the treatment of diseases such as HIV/AIDS and TB, especially in countries like Zambia, Swaziland, Zimbabwe and South Africa, as it is believed to generally improve quality of life in these patients. But it has been shown to lower the plasma levels of the antiretroviral drug, atazanavir, to sub-therapeutic levels when they’re taken together, reducing its anti-HIV efficacy. This traditional remedy can also interfere with isoniazid therapy, which is used as a preventative measure in TB treatment. Despite these known interactions, policy makers still promote the use of these herbal remedies in the management of HIV/AIDS and associated illnesses. Clearly more public engagement is needed so patients understand the risks of interaction.

However, there is Good News

But it’s not all bad news. Interactions between African traditional medicines and prescribed medicines can potentially be exploited for good. One of the biggest problems in the development of new medicines is the low uptake of these compounds into the body, or its quick removal. In some studies, traditional medicines have been shown to have the ability to increase uptake or decrease the metabolism of prescription drugs. Applying these effects could enable the development of new herb-drug combinations with increased efficacy and reduced side-effects. But studies that characterise and evaluate the healing properties or potential toxicity and drug interactions of traditional African medicines are very limited. This is further complicated by the fact that so many medicinal plants (more than 5000) are being used. So healthcare practitioners have limited information and often can’t make proper recommendations to patients who use such traditional remedies.

Whether positive or negative drug interactions are at play, African countries need to improve their regulation around traditional medicines. Only a few, among them Nigeria, Cameroon and South Africa, have incorporated traditional African medicines into their adverse drug reaction reporting systems.