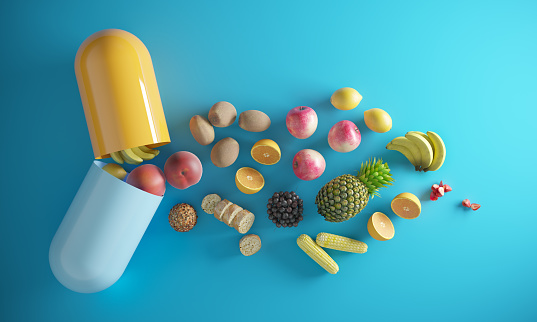 In this article we discuss the primary function of each of the minerals involved in metabolism and summarise the roles of minerals important in blood function and renewal. In a well-balanced diet, minerals are plentiful, and herbs are power-packed with minerals. Eat more plants, spice up your food, and drink herbal teas to obtain optimum mineral nutrition. Part of the reason for discussing this topic is the following:

Anaemia is caused by a lack of iron. Iron is an important mineral and one that we will now discuss in more detail.

Iron is a trace mineral that we need small quantities every day. It is slightly water soluble and is a cation that exists in two states, +2 (ferrous) or +3 (ferric). Red blood cells contain the oxygen carrier protein haemoglobin. It is composed of four globular peptides, each containing a heme complex. In the centre of each heme, lies iron (Figure 1 below). 80% of the body’s iron is bound to haemoglobin. In the muscle, iron is part of the oxygen-binding protein, myoglobin. Iron is a key component of hundreds of metabolic enzymes. Many of the proteins of the electron transport chain contain iron–sulphur clusters involved in the transfer of high-energy electrons and ultimately ATP synthesis. Iron is also involved in numerous metabolic reactions that take place mainly in the liver and detoxify harmful substances. Moreover, iron is required for DNA synthesis. The great majority of iron used in the body is that recycled from the continuous breakdown of red blood cells.

The iron in haemoglobin binds to oxygen in the capillaries of the lungs and transports it to cells where the oxygen is released (see “Video below”). If iron levels are low haemoglobin is not synthesised in sufficient amounts and the oxygen-carrying capacity of red blood cells is reduced, resulting in anaemia. When iron levels are low in the diet the small intestine more efficiently absorbs iron in an attempt to compensate for the low dietary intake, but this process cannot make up for the excessive loss of iron that occurs with chronic blood loss or low intake. Only 2-35% of the iron in your diet is absorbed. Once absorbed, the iron may be incorporated into haemoglobin or myoglobin to transport oxygen, or incorporated into other proteins, or stored in the liver, bone marrow or spleen. Ferritin is the molecule that stores iron in mucosal cells. When the iron is needed it is released from the ferritin and transported by transferrin to other cells for use. Once in the body, it is difficult to excrete iron but some iron will be lost when mucosal cells of the gut are shedded, a process that occurs about every 3-5 days.

Erythrocytes or RBCs circulate for about 120 days and then they are removed. When blood cells are decommissioned, the liver and spleen degrade the red blood cell and transferrin or recycles the iron back to the liver the bone marrow where red blood cells are made. The heme component is recycled into bile. Hepcidin, a hormone produced by the liver, regulates iron balance by inhibiting its release. A relatively small amount of iron is excreted when cells lining the small intestine and skin cells die and in blood loss, such as during menstrual bleeding. The lost iron must be replaced from dietary sources. Watch this video to view how haemoglobin in red blood cells transports oxygen to all cells in the body.

Today, many people around the world are iron deficient. They can improve their iron status by changing their diets. But how does this work? Here is an overview of iron absorption–the factors that enhance it and the substances that inhibit it. Heme versus nonheme iron, The bioavailability of iron depends on several factors. People who are iron-replete absorb iron less easily than people who are iron-deficient. In addition, absorption depends on the specific form that iron takes.

Heme iron is the most readily absorbed form of iron, and it’s found in shellfish, red meat, poultry, and fish (see the chart in this article about iron rich goods). On average, people absorb between 15-35% of the heme iron they consume (Insel et al 2003).

Nonheme iron is found in plant foods, as well as in eggs, milk, and meat. Compared with heme iron, it’s less easily absorbed by the body. Moreover, sources of nonheme iron often contain phytates, which bind to iron and carry it through the digestive tract unabsorbed. As a result, the foods with high iron content aren’t necessarily the best sources of iron. By weight, soybeans have roughly twice the iron of beef. But only about 7% of the iron in soybeans is absorbed. Spinach is also high in iron, but less than 2% of the iron in cooked spinach is absorbed (Scrimshaw 1991).

Nonheme iron is harder to absorb. But this doesn’t mean it’s unimportant. What’s needed is a way to improve the body’s absorption of nonheme iron, and you can do this by adding one or more of these iron absorption enhancers to your meals:

Vitamin C may be particularly effective. One study reported that adding just 63 mg of vitamin C to a meal rich in nonheme iron yielded a 2.9-fold increase in iron absorption (Fidler et al 2009).

Meat can also make a big difference. Experiments suggest that adding 50 to 85g of meat to a meal results in a 1.5- to 4-fold increase in iron absorption (Baech 2003; Baynes and Bothwell 1990; Cook et al 1976; Engle-Stone et al 2005; Navas-Carretero 2008). Beef may more effective than other meats. In one experiment, beef protein enhanced iron absorption 80% better than did chicken protein (Hurrell et al 2006).

The flip side of the coin are substances that inhibit the absorption of iron:

This may seem confusing as many nutritious, healthful foods contain iron absorption inhibitors. It’s not desirable to cut these out of your child’s diet–your child needs calcium, zinc, phosphorus, and fibre. However, if your child is iron deficient, it might be helpful to avoid some of these foods just before, during, or after a meal that contains iron rich foods.

What about phytic acid? Phytates, which are found in most plant foods, can reduce iron absorption by up to 80%. But vitamin C—consumed along with a meal–can counteract the effect. In one study, preschoolers with iron deficiency anaemia were given vitamin C supplements twice a day—100 mg at each of two phytate-rich meals. After two months, most of the kids were no longer anaemic (Seshahdri et al 1985). This underscores the importance of vitamin C. Many grains and legumes (including soy) can be good sources of iron-if you consume them with vitamin C.

Iron-fortified cereals-consumed with vitamin C-can be an effective way to improve your child’s iron status. So can iron-fortified soy sauce (Chen et al 2005).

Cooking with iron cookware can add iron to your diet, particularly if you cook acidic foods at high temperatures (Kuligowski and Halperin 1992).

Although egg protein inhibits the absorption of iron, a few egg yolks might not hurt. In a study of healthy, iron sufficient weanling infants, researchers fed 6-month-old babies egg yolks from eggs enriched with n-3 fatty acids. Babies ate 4 cooked yolks a week for 6 months. At the end of the treatment, their iron status was similar to that of controls (Makrides et al 2002). The study didn’t describe whether the eggs were eaten alone or in the context of a meal.

Zinc is a trace mineral that is a cation and cofactor for over two hundred enzymes in the human body that play a direct role in RNA, DNA, and protein synthesis. Zinc also is a cofactor for enzymes involved in energy metabolism. It is important for wound healing, transport of vitamin A, taste perception, growth and development, and cofactor in genetic material and protein (zinc fingers).

As the result of its prominent roles in anabolic and energy metabolism, a zinc deficiency in infants and children blunts growth. The reliance of growth on adequate dietary zinc was discovered in the early 1960s in the Middle East where adolescent nutritional dwarfism was linked to diets containing high amounts of phytate. Cereal grains and some vegetables contain chemicals, one being phytate, which blocks the absorption of zinc and other minerals in the gut. It is estimated that half of the world’s population has a zinc-deficient diet.Prasad, Ananda. “Zinc deficiency.” BMJ 2003 February 22; 326(7386): 409–410. doi: 10.1136/bmj.326.7386.409. Accessed October 2, 2011. This is largely a consequence of the lack of red meat and seafood in the diet and reliance on cereal grains as the main dietary staple.

In adults, severe zinc deficiency can cause hair loss, diarrhoea, skin sores, taste changes, loss of appetite, impaired vision, impaired immune function, and weight loss. Zinc is a required cofactor for an enzyme that synthesises the heme portion of haemoglobin and severely deficient zinc diets can result in anaemia. People at risk of developing a zinc deficiency are people consuming excess iron, copper and/or dietary fibre, people that lack financial access to a nutrient adequate diet, the elderly, pregnant women and children. Zinc is rich in foods high in protein.

Copper is a trace mineral that is cation and exists in the +1 or +2 state. Like iron, copper assists in electron transfer in the electron-transport chain. Furthermore, copper is a cofactor of enzymes essential for iron absorption and transport, and haemoglobin synthesis. The other important function of copper is an antioxidant. Symptoms of mild to moderate copper deficiency are rare. More severe copper deficiency can cause anaemia from the lack of iron mobilisation in the body for red blood cell synthesis. Other signs and symptoms include growth retardation in children and neurological problems because copper is a cofactor for an enzyme that synthesises myelin, which surrounds many nerves. Groups at risk of developing a copper deficiency are people who consume too much zinc.

Menke’s disease is a genetic disorder that causes a copper deficiency. The onset occurs typically during infancy and is characterised by sparse, kinky hair; failure to gain weight and grow at the expected rate (failure to thrive); and deterioration of the nervous system. Often these children do not live past age 3. Early treatment with copper may improve the prognosis in some affected individuals. Individuals with the rare inherited disease, Wilson’s disease, accumulate copper in the liver and brain.

Mineral Functions in Metabolism and Blood and Deficiency Syndrome

If you are concerned that you may have anaemia or other listed symptoms, speak to your doctor or healthcare practitioner about your best treatment and mineral requirements.