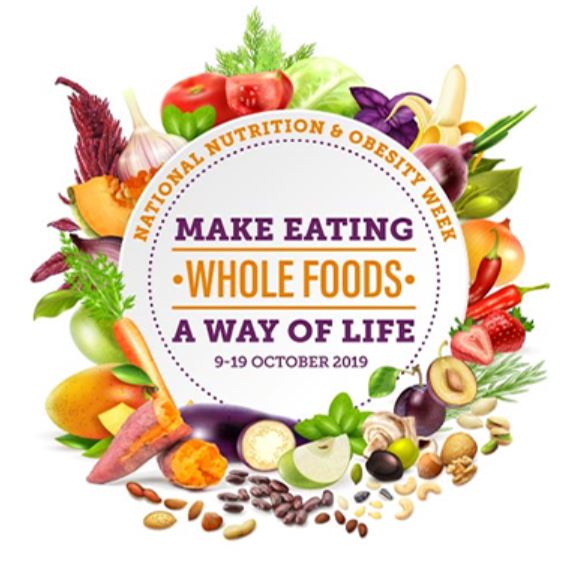 It is certainly encouraging and heartwarming to see the emphasis during National Nutrition week for 2019 to be focusing on the fundamentals of our core well-being and highlighting the use and consumption of WHOLE FOODS.

Despite what we know about the impact of food choices on our health, overweight and obesity are still on the rise in South Africa, alongside a host of preventable diseases that can be attributed to unhealthy lifestyles.

The message that a coalition of health professionals, including the Department of Health, is highlighting in October during National Nutrition and Obesity Week (9 to 19 October) is that, thanks to our industrialised food system, and far greater, ultra-processed and fast food choices aimed at our ‘convenience’, we’ve got further away from eating the whole foods that are really good for us.

This year’s theme is:

Some Facts you may not be aware of:

At Balanced Healing we focus on the fundamentals of health with the pivotal emphasis being on our daily nutritional intake to be the main focus on health & wellness. Healing begins with adequate nutrition.

Balanced Healing is passionate about creating healthy eating habits and with individual consultation & tailor made planning, assist many people with their nutritional & Lifestyle management. Thus ultimately promoting healing of chronic or sub-clinical ailments such as inflammation, digestive issues and in the prevention of escalating disease processes in obesity driven ailments such as Insulin Resistance, Cholesterol management and some endocrine / hormonal disturbances.

“Let thy food be thy medicine and medicine be thy food“, often ascribed to Hippocrates (400 BC), and used to emphasize the importance of nutrition to prevent or cure disease.

For more information, please be sure to visit the Department of Health National Nutrition week 2019 web page: https://www.nutritionweek.co.za/NNW2019/